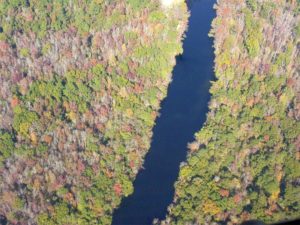 Under the North Carolina Natural and Scenic Rivers Act (NCNSRA) , there are three classifications that a river can receive – natural, scenic, and recreational. The Lumber River has all three classifications at some point along its course. The uppermost part of the river from State Route 1412 (Turnpike Bridge) to Back Swamp is the narrowest section of the river, measuring an average of 40 feet in width. This section is classified as scenic, which is defined as largely primitive, undeveloped, and free of impoundments, but accessible by roads. This classification lends itself to wilderness-type experiences, such as solitude and wildlife viewing. The middle portion from Back Swamp to Jacob Swamp Canal is wider, averaging 75 feet, and is classified as recreational because it offers outstanding recreational and scenic values and is largely free of impoundments, but has development and an extensive road system along its banks. The segment downstream of Jacob Swamp Canal to the border with South Carolina varies in width from 30 to 75 feet and is classified as natural, with the exception of the portion within the Fair Bluff city limits, which is designated recreational. A natural river segment is defined as unpolluted, surrounded by lands in an essentially primitive condition, free of man-made impoundments, and generally inaccessible except by trail.

Description of the River and Its Resources

Access: The Lumber River is accessible by interstate and other highways and by State and county roads. Interstate 95 crosses the river in Lumberton. Many other State roads cross, run parallel to, or provide access to the river. Highway 74 roughly parallels the river for about 30 miles, running in a southeasterly direction from Maxton to Pembroke and past Lumberton and then to the southeast from Lumberton to Boardman.

Recreation: The Lumber River is one of the most highly prized recreation sites in North Carolina; recreation varies from active outdoor recreation, to festivals, to passive activities. Among the most popular activities are canoeing and boating, fishing, hunting, picnicking, camping, nature study, swimming, biking, jogging, crafts and fossil and artifact hunting.

Canoing: One of the best way to experience the unique characteristics of the Lumber River is by canoe. The visitor experiences miles of natural settings that one would normally expect in highly isolated areas. The visitor can choose between a variety of canoeing challenges and trip lengths. Trips can vary from one hour along some river sections to several days navigating the entire river.

The river has been divided into recreation water trails and has 24 canoe access points at road intersections. The river is smooth water with a velocity ranging from less than two miles per hour to four miles per hour. The most popular portion of the river for canoeists is the Lower Lumber River Recreational Trail, a part of the North Carolina Trails System, which has 17 segments. Intensive canoeing activity can take place within the eight-mile stretch of river through Lumberton in Robeson County, ranging from N.C. 72 at McNeill’s bridge to its intersection with N.C. 72 at High Hill. This area has good accessibility.

The Lumber River provides a variety of flatwater canoeing opportunities. The upper sections of the river require greater canoeing skills than in lower sections because of fallen trees, narrow stream widths, and somewhat swifter water. There are serious impediments to passage on the upper portion of the river; the lower river has few obstructions. The meandering nature of the river and the force of unseen currents provide challenging variations in navigability to boaters. The NCWRC tries to maintain a small boat passageway along the lower river by cutting up to a six-foot-wide opening where downed trees cross the river.

The popularity of canoeing is reflected by the number of canoe rental operators in the Wagram, Burnt Island, and Fair Bluff areas, as well as at Pembroke and Lumberton, the Robeson County Recreation Department being among them. In addition, canoeing enthusiasts who live along the river have organized clubs such as the Upper Lumber River Association and the Lumber River Canoe Club. 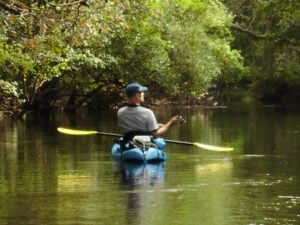 Hunting: Hunting for survival and for sport has always been an important activity in the region. All along the river there are opportunities for hunting deer, squirrel and other game. The North Carolina Wildlife Resources Commission (NCWRC) manages three boating access areas along the river, which provide access for hunters. In addition, the Sandhills Game Lands are located in the upper watershed of the river. An 18,191-acre portion is found in Scotland County, composed of a number of tracts of land. One tract occupying about 580 acres is located in the upper region of the river around its intersection with State Route 1412. Hunting also takes place at the 231-acre Bullard and Branch Hunting Preserve in Robeson County. 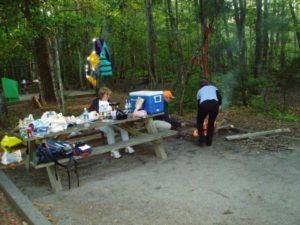 Picnicking, Camping and Recreation Sites: A number of points along the river, accessible by canoe or road, are ideal for family and group picnicking and camping. The towns of Maxton, Pembroke, Lumberton and Fair Bluff offer opportunities for picnicking and provide playgrounds for children. In Lumberton, recreational opportunities can be found at Luther J. Britt Park, James Stephens Park, Turner Gore Park, Bicentennial Park, and Noir Street Playground. In addition to these public recreation areas, a number of private recreational sites exist along the river.

Biking and Jogging: Hiking, jogging, walking and bicycling along the river are popular recreational pursuits for residents in the Lumberton area. McMillan Beach has the potential to be incorporated into the open space trail system of the City.

Swimming: Swimming takes place at many areas along the river, particularly by local residents who are familiar with the river. The black appearance of the water, swirling undercurrents, fallen trees, and underwater snags can make swimming unsafe, however.

Fossil and Artifact Hunting: Many amateur and professional paleontologists enjoy finding fossils and artifacts in North Carolina, particularly in the eastern part of the State, which is rich in locations. A diverse number of species of fossilized plants and animals ranging from a few thousand to millions of years old can be seen on the State’s river banks and exposed geologic areas.

One particular area on the banks of the Lumber River near Lumberton has been singled out due to ease of access, abundance and diversity of fossils, and historical and geological significance. It is on the east bank of the river about one-quarter of a mile upriver from the N.C. 72 intersection with the river. The location has a basal oyster-rich bed, a middle bed with abundant and diverse open marine mollusks and a few estuarine mollusks, and an upper bed with mostly fragmented shells. Such fossil areas are important for resource interpretation and education. It should be noted that fossil collecting is not permitted on State park property under State park regulations. 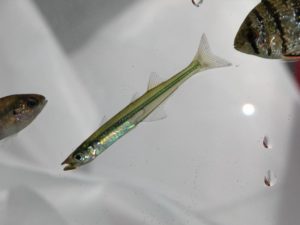 Wildlife: The Lumber River supports a diverse wildlife community. Most of the species are common to eastern hardwood forests and swamps (whitetail deer, raccoon, beaver, mink, turkey, ducks, etc.); however, there are several notable rare and endangered animal species within the river system. The alligator is foremost among these; the alligator is rare at this latitude this far from coastal waters. It ranges along the entire river floodplain, but its numbers are few. A unique fish, the cape fear chub, previously unknown in the Lumber River, has been identified in both the river’s upper and lower reaches. Rare invertebrates also can be found, including lepidopterans, among which is the giant yucca skipper, whose larvae depend on the Yucca plant. The endangered red-cockaded woodpecker is found in the uppermost reaches of the river. The pine barrens treefrog and the river frog, two rare amphibian species, have also been identified in the uppermost portions of the river.

Cultural Resources: A number of archaeological sites are found on high ground along the river. Most of these areas have been disturbed by the agricultural and forestry practices of the post-Columbian era, however. Isolated artifacts and fossils that have been discovered include a dugout canoe estimated at over 1,025 years old, an indication that pre-Columbian peoples navigated the river for trading, fishing, hunting, and other cultural activities. Accounts of finding stone artifacts in the Riverton area likely indicates the area was inhabited by Native Americans. Most of the archaeological work in the Lumber River region has been done in Robeson County but is thought to be representative of the general archaeology of the area.

Four hundred and twenty-nine archaeological sites have been recorded in Robeson County. Each site was classified under one of four categories: Paleo-Indian, Archaic Woodland, Mississippian and Historic. There are 47 sites with potential archaeological importance, 20 of which have been nominated to the National Register of Historic Places.

The Paleo-Indian Period, dating possibly to 20,000 B.C., is characterized by nomadism, hunting and food-gathering. The most distinctive tools had lanceolate projectile points.

The Archaic Period, from about 8,000 B.C., saw a slight climatic warming and a consequent increase in human population and deciduous trees. It was characterized by a reliance on smaller animal species and the collection of flora as well as fishing and shell-fishing. An inventory of tools found from this period shows adaptation to the forest environment. Among the implements found are stemmed and notched projectile points, atlatl (spear-throwing) weights, knives, axes, scrapers, choppers, drills, and grinding and nutting stones.

The Woodland Period began between 2,000 B.C. and 1,000 B.C. and continued into the time of European settlement. It was characterized by the further development of subsistence agriculture and ceramics, although hunting and gathering continued. In the early part of this period, the bows and arrows using small projectile points, or true arrowheads, were first used. These Native Americans abandoned the nomadic lifestyle for village life.

The Mississippian Period began in 900 A.D. and coexisted with cultures of the former three periods as well as with the next, the Historic Period. It was a period characterized by subsistence agriculture in areas near sizeable villages; corn was the major crop. Native Americans constructed flat-topped earthen mounds as part of their ceremonial activities. Projectile points were small and triangular or pentagonal. Ceramics bore decorations of stamps of rectilinear or curvilinear forms, or they were highly polished.

The Historic Period began with the arrival of European explorers, the earliest of which were Italian, Spanish and Portuguese. The period of written history of Native Americans began with the English colonists on Roanoke Island in 1585. A number of different Native American groups speaking different languages (Siouan, Iroquoian, Algonkian and Muskogean) were in the area. It was from these indigenous groups that the present Native American population descended. Artifacts of interest from this period include kaolin and other pipes (items of European influence) for tobacco smoking, gunflints, and ceramics of plain whiteware, pearlware and creamware, together with the traditional types. Also found were colored salt-glazed stoneware and various types of porcelain. Dark green bottle fragments from the 19th century are included in these artifacts found along the Lumber River.